“Achkan” – its sounds so cool but wearing it is even cooler!

In the last decade, men’s ethnic fashion in India has evolved substantially. The unique feature in this paradigm shift is the fact that instead of adapting western styles of clothing, the trend with designers seems to be bent towards the more traditional forms of formal wear.

Around a decade ago, wedding wear or traditional clothing for men was either an embellished kurta or a traditional sherwani. At that point of time, concepts of the Jodhpuri suit or the Angarakha kurta or jackets etc was yet to be introduced! But slowly, these items have come into the periphery of ethnic wear for Indian men. 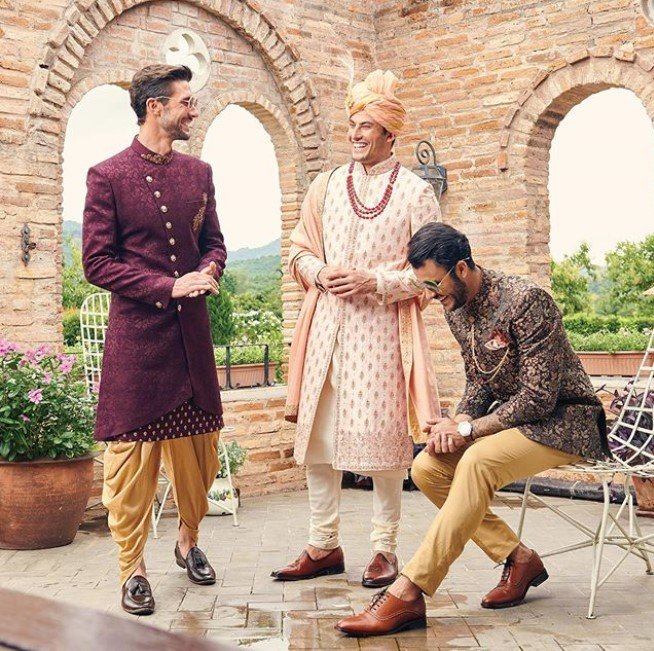 Take for example the achkan kurta, which looks much like the sherwani yet is entirely different! In fact, if observed closely it has a strong resemblance to menswear in Mughal courts. In fact, the achkan has its roots in Central Asia and today it has been adapted as one of the most popular forms of ethnic wear for Indian men.

An achkan, basically, is a knee-length jacket, buttoned down the centre or side. It has long sleeves and a breast pocket in the left side. The buttons run all the way down to the bottom hem from the neck line. Achkans are usually made up of light fabrics which makes them an immensely popular, smart and sleek option of weddings in summer.

The Achkan Vs The Sherwani

The biggest confusion Indian men face today is whether they should wear an achkan or a sherwani at a traditional function. This confusion is enhanced by the fact that both the attires look similar from a distance. But observed closely, an achkan and a sherwani are pretty different from eacg other no matter which point of view you use. Let us find out about the major points of difference between the achkan and the sherwani. 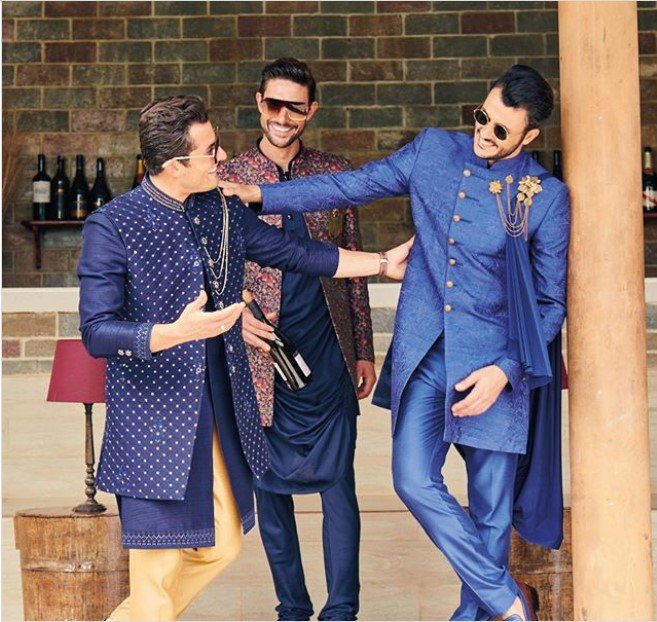 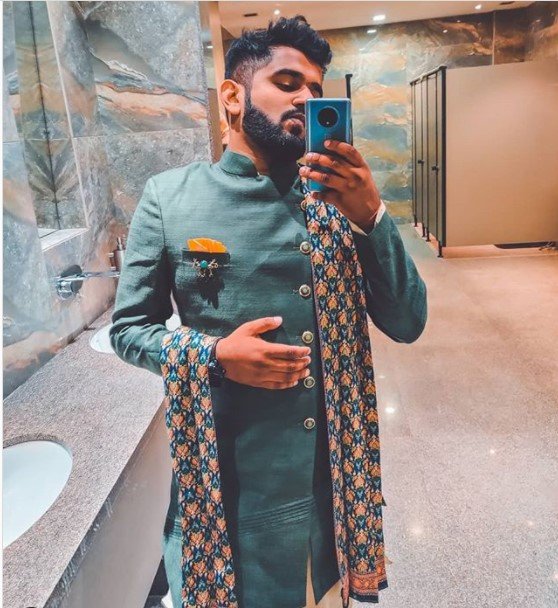 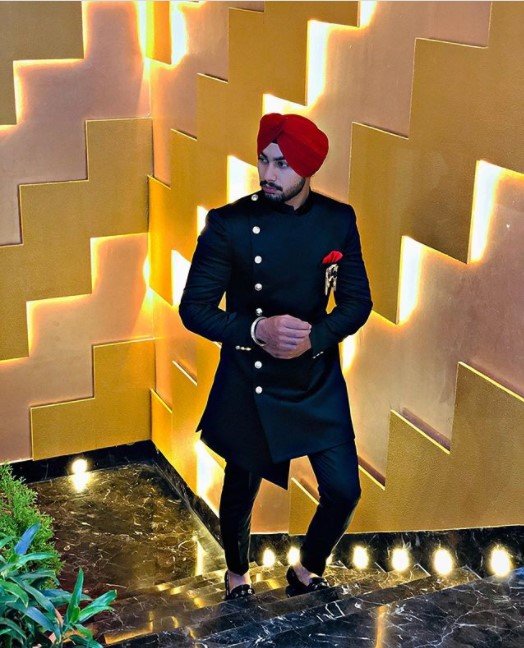 A group of fashion historians opine that after the British introduced the concept of well-tailored outfits into the fashion arena of the Indian princely states, some bent towards the achkan and some chose to stick to the sherwani. The northern states that has been invaded by the Mughals before and had a history of war with them, went for the achkan.

On the other hand, the states which had been friendly with Mughals refrained from including British tailoring concepts in their fashion game and stuck to the sherwani. This may be the historical reason why the achkan and the sherwani co-existed and got popularized together, though in parallel universes.

The achkan kurta is immensely popular among Indian men today and owing to the outfit’s lightness and simplicity, it can be worn on non-wedding occasions as well. These guys on Social Media have nailed it when it comes to styling their achkan kurtas. 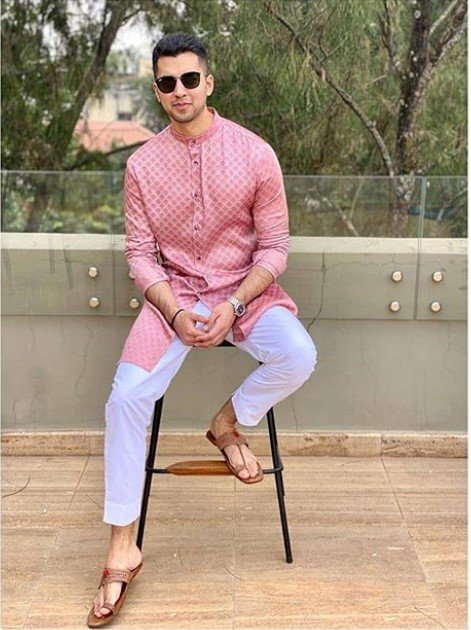 A pink textured achkan over white cigarette pants and trendy shades – that is all one needs to look this desirable! This guy has understood the rules of the game – simplicity with swag!

2. Brooches instead of Buttons 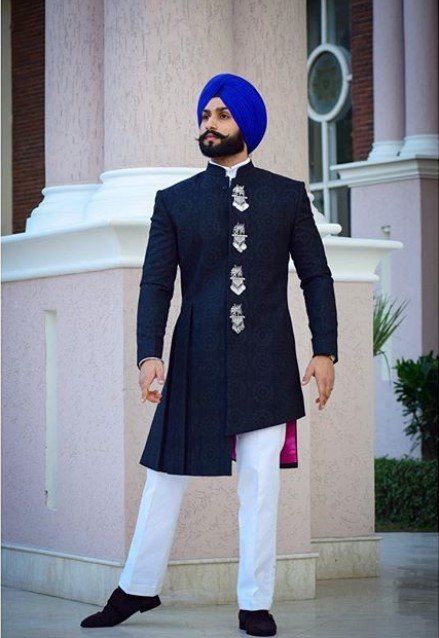 The achkan style is primarily simple and straightforward. Enhancing that with a lot of embellishments kills the masculinity of the outfit. But this guy has played it clever. Instead of traditional buttons he has used big ones that resemble brooches. This input adds just a hint of glitz.

3. The Groom in Blue 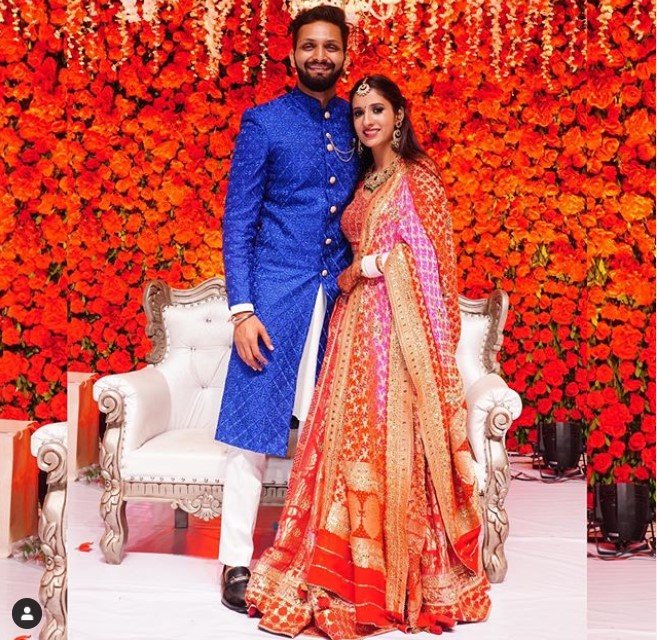 If you want to wear an achkan on your wedding, you may go for something like this. This bright blue textured achkan looks glamorous yet bears a sense of sophistication. 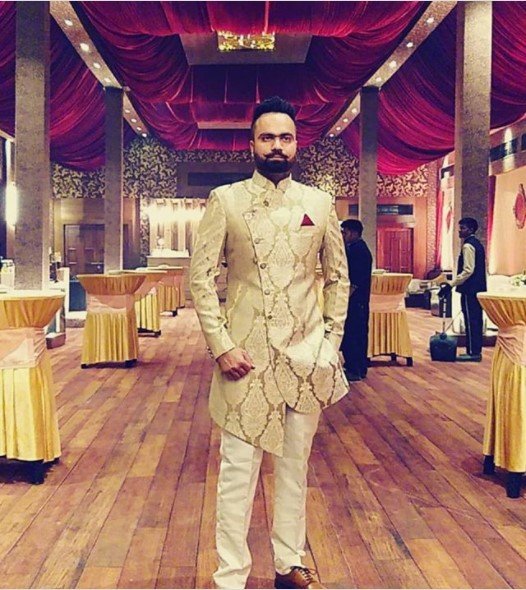 This side-buttoned, angarakha style achkan with an uneven hem is as royal and as traditional as one can get. The beige brocade fabric just adds to the glamour quotient of the outfit. The cleverly used red pocket square adds the required touch of color. It’s an example of a well-used accessory. 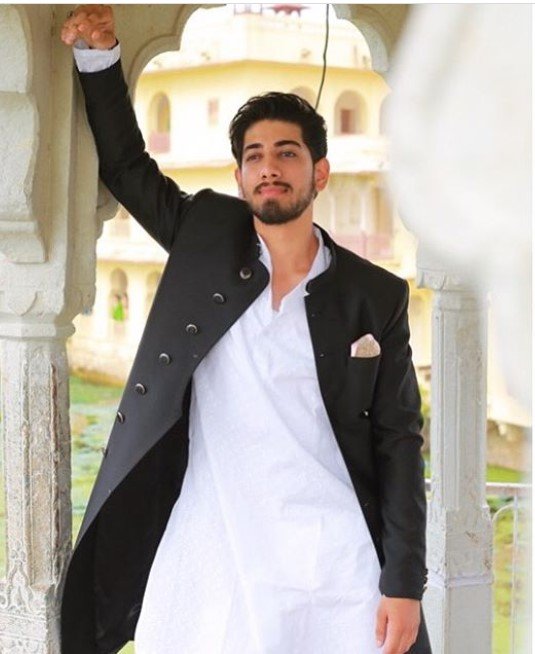 The achkan is a jacket after all! This guy has done just that by pairing a dark colored solid achkan with a white kurta. This layered look frames the physique really well and results in a casual but glamorous style. 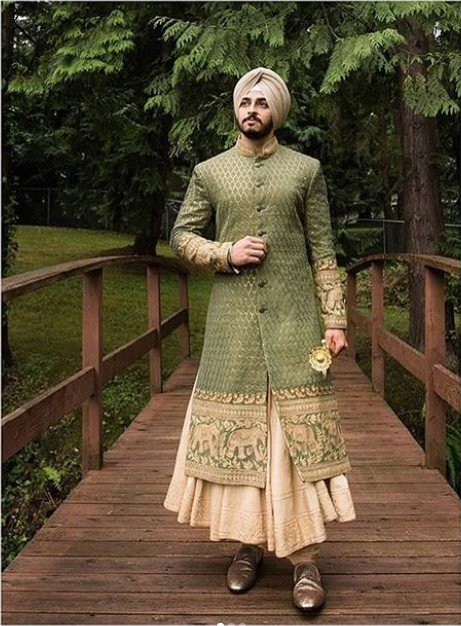 If you can carry it, you might want to drift back to a style of the bygone days. This achkan kurta in light green and beige has been worn over a kurta with a flared hem. If you really want to wear a statement outfit for your wedding, you may go for this kind of a look. 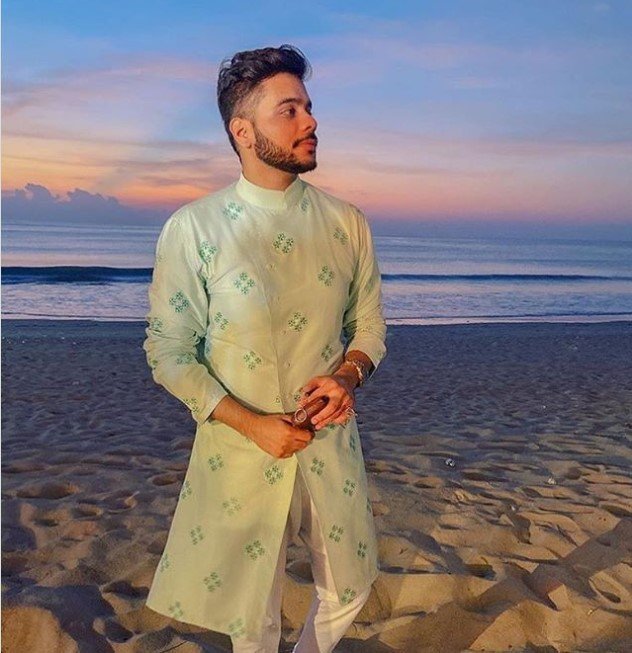 If you are attending an Indian destination wedding on a seaside, you may be confused about what to wear! On one hand an Indian wedding outfit demands high ethnic quotient and on the other the beach inspires you to keep it casual. You really can’t wear a sherwani or a Jodhpuri suit on such an occasion! We suggest you go for something like this. This kurta is in a light sea green color with sparsely placed motifs in a shade darker than the base color. This is casual yet traditional. 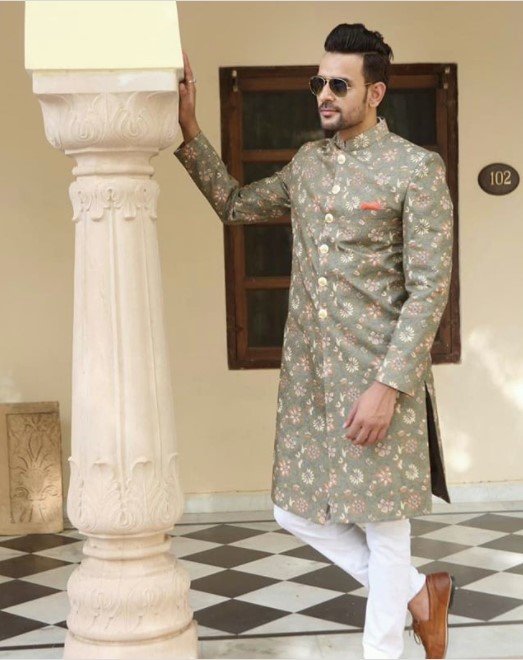 Another great outfit for a groomsman is an achkan in a light pastel shade, like this one. It has lightly embroidered floral patterns all over and has been paired well with white trousers and leather footwear, creating an Indo-western look. 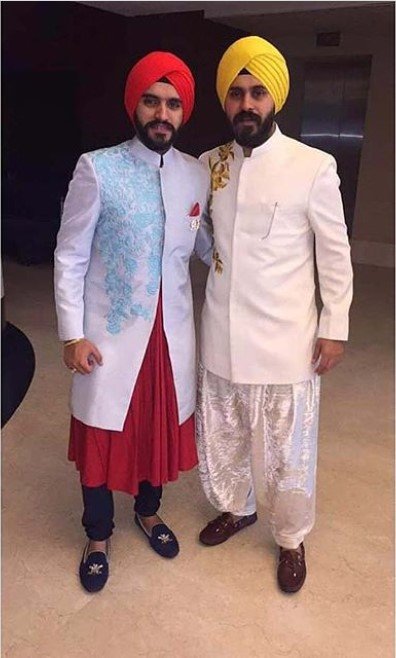 The guy in this blue and maroon achkan look must have a really good designer! Taking traditional cuts and styles like an achkan jacket, a flared kurta and a churidar, this unique look has been created. The solid light blue achkan has a nice dash on self-color embroidery which does not look ‘over the top’. This has been contrast paired with a dark maroon kurta and a black churidar. 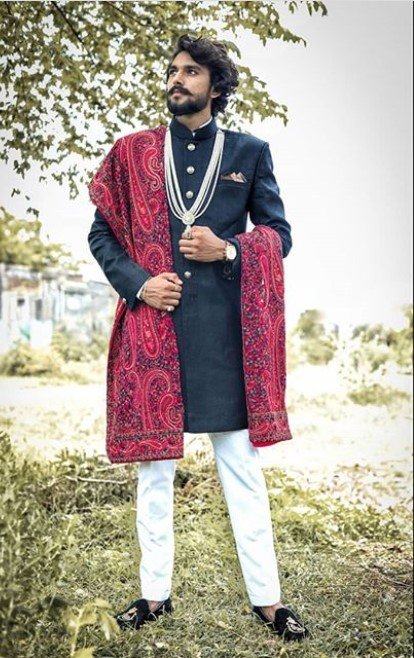 The achkan was first introduced as an outfit for the royalty and the nobility. So you just can’t go wrong with it if you sport an achkan styled with a royal flavour! This rich dark achkan has been paired with a vintage pearl necklace and a Kashmiri shawl. The look is extremely classy and stately. This can easily be your reception evening look.

The achkan kurta may have its forefathers in the ancient Mauryan, Parthian or Central Asian Empires, but today, it has been widely embraced by men both in India and Pakistan. A few years ago, it was first adopted by the royalties of the Sikh, the Maratha and the Rajput communities.

The achkan was popular wedding wear for them mainly owing to the attire’s strong masculine vibe. The achkan kurta today breathes smartness. It is a well-tailored, well-fitted and an extremely classy and glamorous outfit. Today it is worn by Indian grooms during wedding ceremonies or other formal festive occasions. 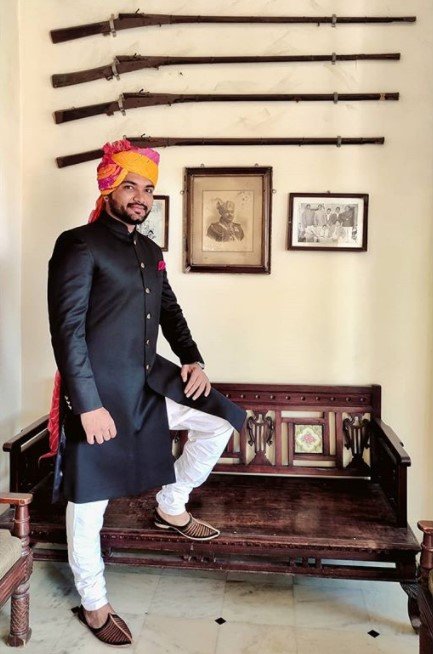 Let us see what else makes a good achkan kurta 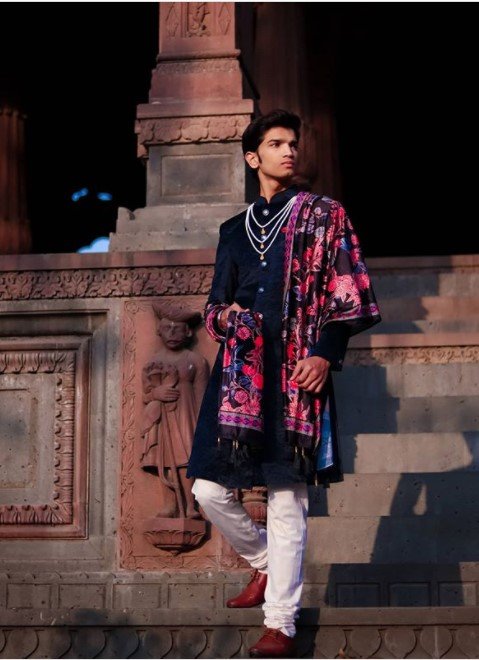 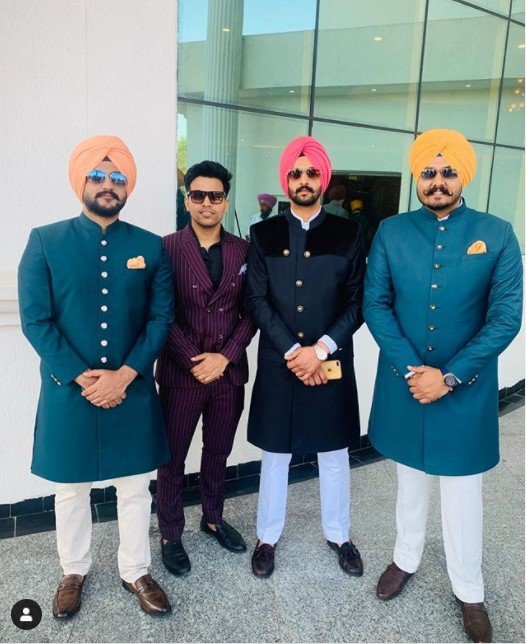 Chapters in the History of the Achkan Kurta

There were strings that had to be fastened here which would bring the torso of the outfit in shape. Different versions of the angarakha kurta was popular in various regions across the subcontinent. 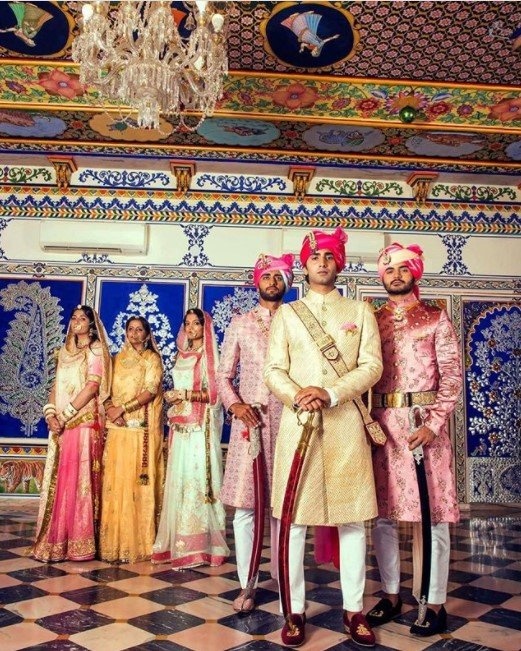 rajput_sardars | Get Custom Made Achkan & Sherwani

It should be mentioned here that at this time, Indians were unaware of the concept of structurally tailored clothing. It was the British who introduced tailoring techniques and concepts of fit and cut, shoulder pads etc in India. This became immensely popular among the men of the royalty, nobility and upper class. With the invention of the camera, it became necessary to appear more put-together in portraits.

Moreover, the combination of heirloom jewellery and clothes tailored in a western way proved to be attractive. The royal tailors thus started incorporating western tailoring ways to create Indian clothing. This resulted in a lot of fusion fashion and the angarakha evolved in a myriad ways, one of which was the achkan kurta. 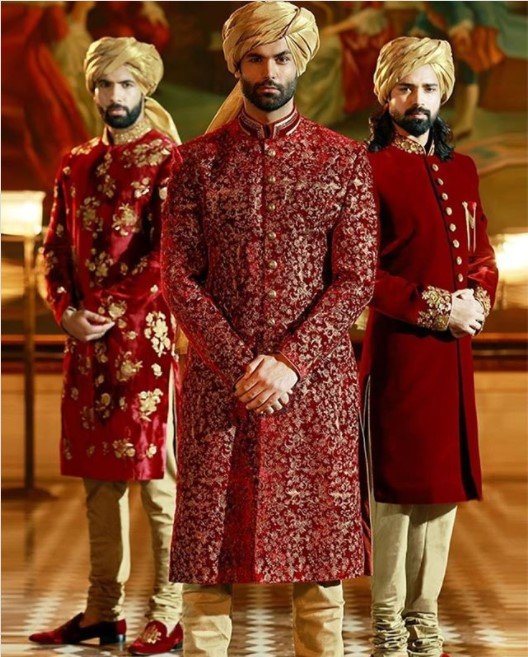 Images and sculptures of an attire resembling the achkan kurta has been found on rocks in Iran. Ancient paintings of the Parthian Empire also show the same. In India, the earliest iconographic evidence of an achkan-like outfit has been traced to the Kushan Empire which was founded by a Central Asian nomadic tribe called Yeuzhi. The culture of the Yeuzhi Kushans was highly influenced by the Greco Parthian Kindgom. Thus, it may be said that the achkan kurta has been derived from something similar that existed in ancient Parthian culture.

Some believe that the achkan kurta has originated in Central Asia. Something resembling an achkan used to be the court apparel among Persian & Turkish nobility. Later on, noblemen and the men of the ruling class during the rule of the Delhi Sultanate and the Mughal Empire wore achkans. In the 18th Century, the achkan was adopted by the Indian aristocracy across cultures. At that time the attire was believed to be a fusion of the Indo-Persian chapkan and chogha with the British frock. 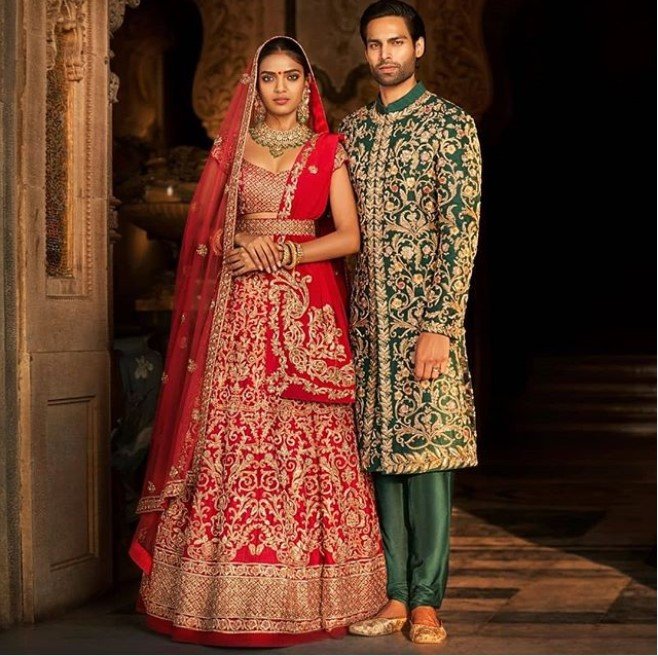 Another very interesting, but not so popular, theory states that ancient Greek documents mention something very similar to the achkan gown-like attire being used by men and women of the Mauryan era.

Celebs and their Love for the Achkan

Bollywood royalty, Chote Nawaab Saif Ali Khan is known for his love for the achkan. He had sported it during his wedding. 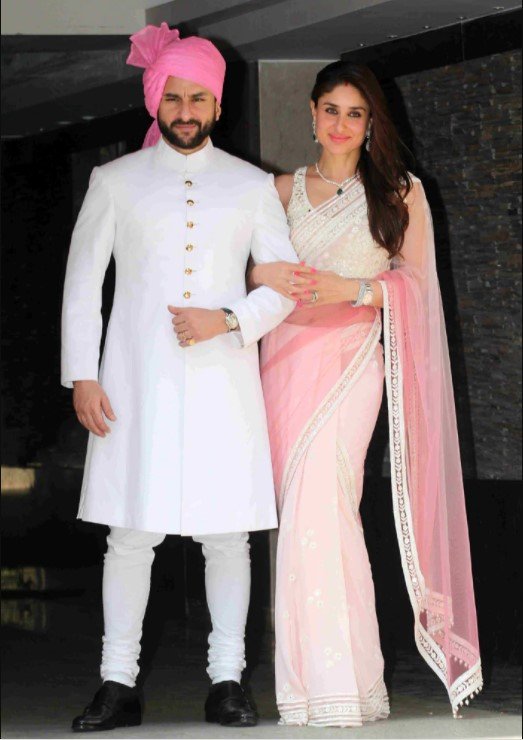 Saif, is often seen in this outfit in other occasions too! 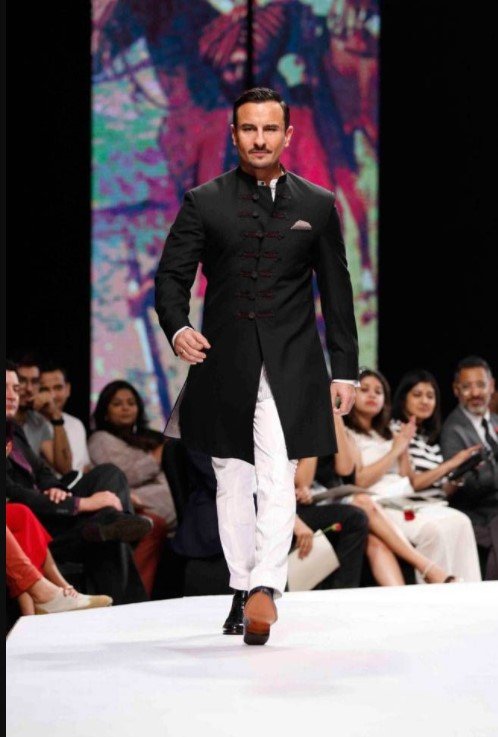 Anil Kapoor is ageing gracefully if not glamorously! He sports this smart achkan on the ramp. The gold brooch and the black shoes complement the outfit! 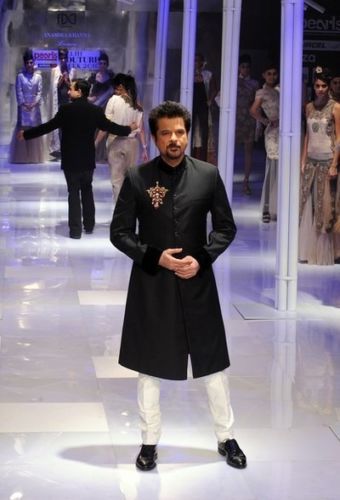 His nephew is not far behind when it comes to the swag! 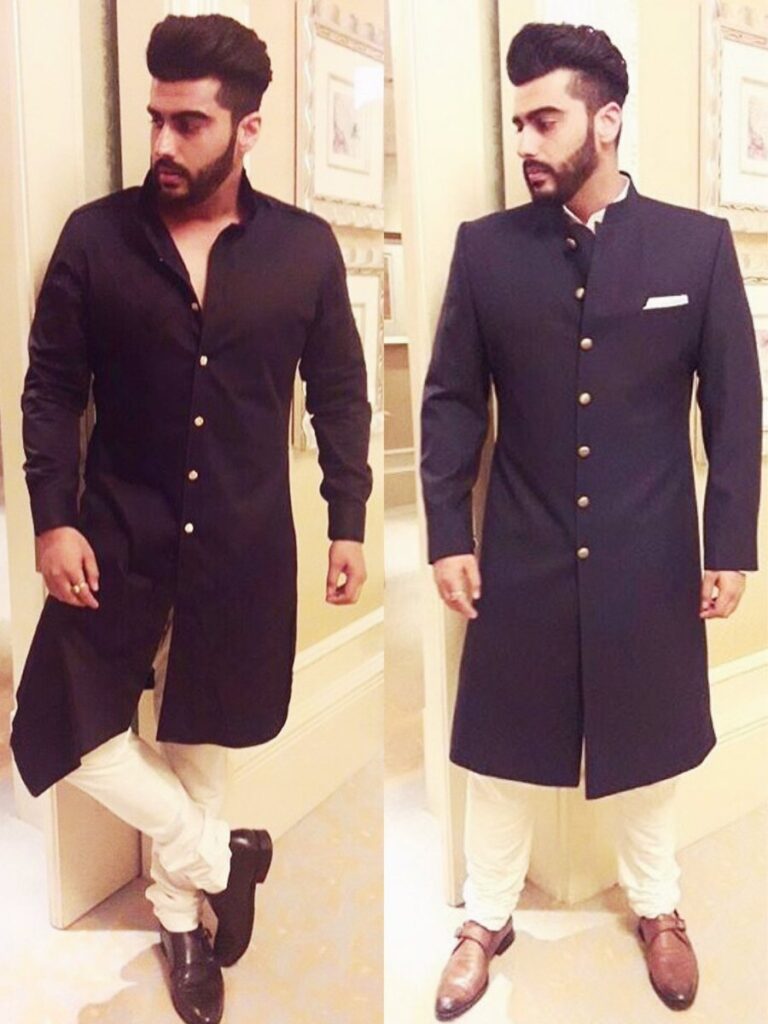 Varun Dhawan is one celeb with a good physique and looks really handsome in this shiny powder blue achkan that he wore to the wedding reception of Sonam Kapoor and Anand Ahuja. 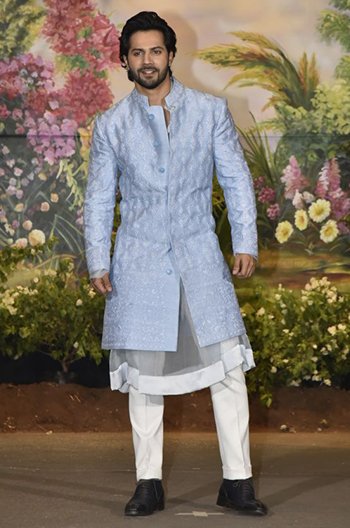 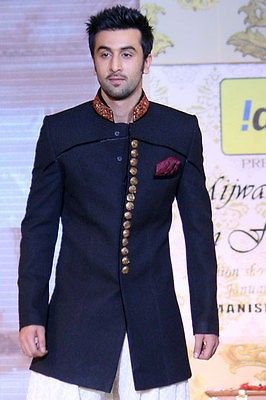 Just before his wedding with Deepika Padukone, Ranveer Singh was touring Switzerland in this achkan! This celeb has a 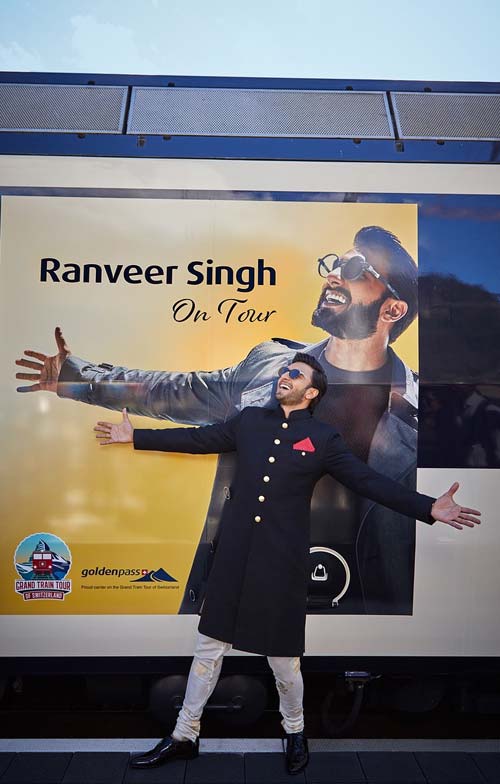 We are sure that you are dying to get your hands on an achkan kurta now! If you still haven’t invested in this style, we suggest you slowly collect a few achkans for your wardrobe as this is one style you can sport at any traditional or semi-traditional occasion. You can wear it all throughout the year as it is not too heavy.

Minimal embellishments make it even more versatile. In fact, in comes in different kind of cuts and can be paired as jackets too! We have a rich collection of achkans in different kinds of styles and you should definitely check out!