A lungi is a traditional cloth that is worn in India and some other countries, including Pakistan, Bangladesh, Sri Lanka, Nepal, etc. It is a traditional attire that is wrapped around the waist and worn like a skirt. The lungi is most popular in areas that have high temperatures. Due to heat and humidity, the lungi is the perfect clothing men can wear to sleep, or as casual clothes, instead of tight clothes that turn out to be unpleasant and uncomfortable.

The lungi is worn mostly by men but women and children can wear it as well. The lungi or a sarong is a drape that gives the person wearing it ease of movement and comfort. A lungi is woven from cotton and has various designs and patterns to select from. 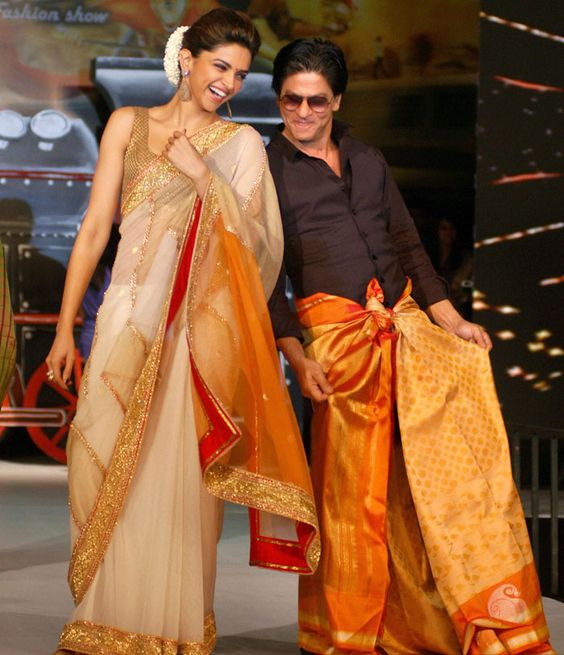 Lungi can be tied in different ways, depending on how the person wearing it wants it. As simple as lungi is, it can be used for several ceremonies including weddings, cultural activities, etc. Although lungi is often viewed as a simple piece of clothing, it is a traditional attire in some places in India, including Kerala. The most common way and perhaps, the simplest way to knot the lungi is to drape the lungi on the waist and simply tie the two ends. Although the simplest way is not considered the safest because it is not always fastened very tight. The knotted style that is considered to be the safest is the pretzel knot. 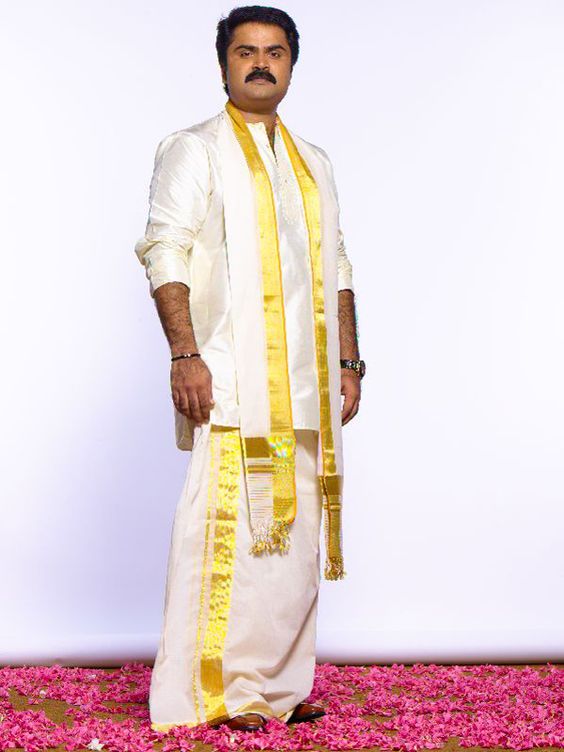 Lungi also comes in plain white which is the Mundus. The Mundus is used in Kerala for special occasions. A touch of golden embroidery to the Mundus is known as Kasavu.

The lungi which stems from South India is worn by different classes of people and for different reasons. The length of the lungi can be adjusted, by tucking it into the waist to make it look like shorts, and labourers use it to work daily. Men and women use it as a sleeping cloth, and it is worn for different events and ceremonies as well. As simple as the lungi is, it can be transformed into the perfect attire that will be suitable for any occasion. Perhaps, this is why the lungi is considered to be a special attire loved by the people of southern India. 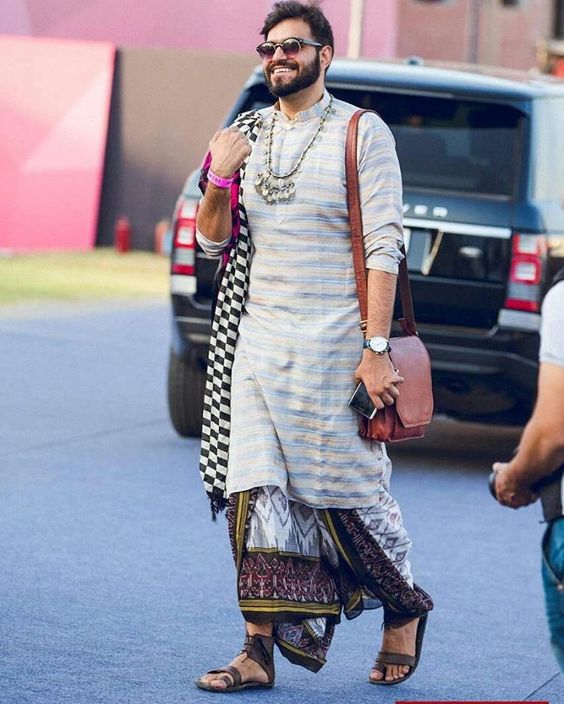 Below is a photo of a regular lungi worn by almost everyone in south India. 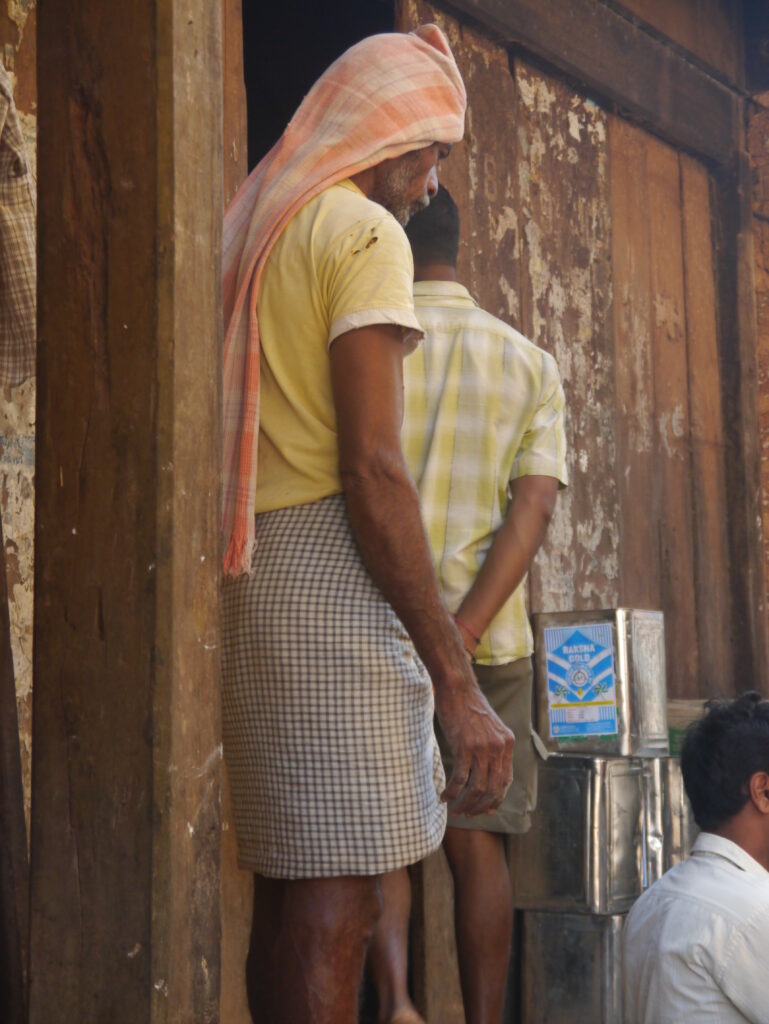 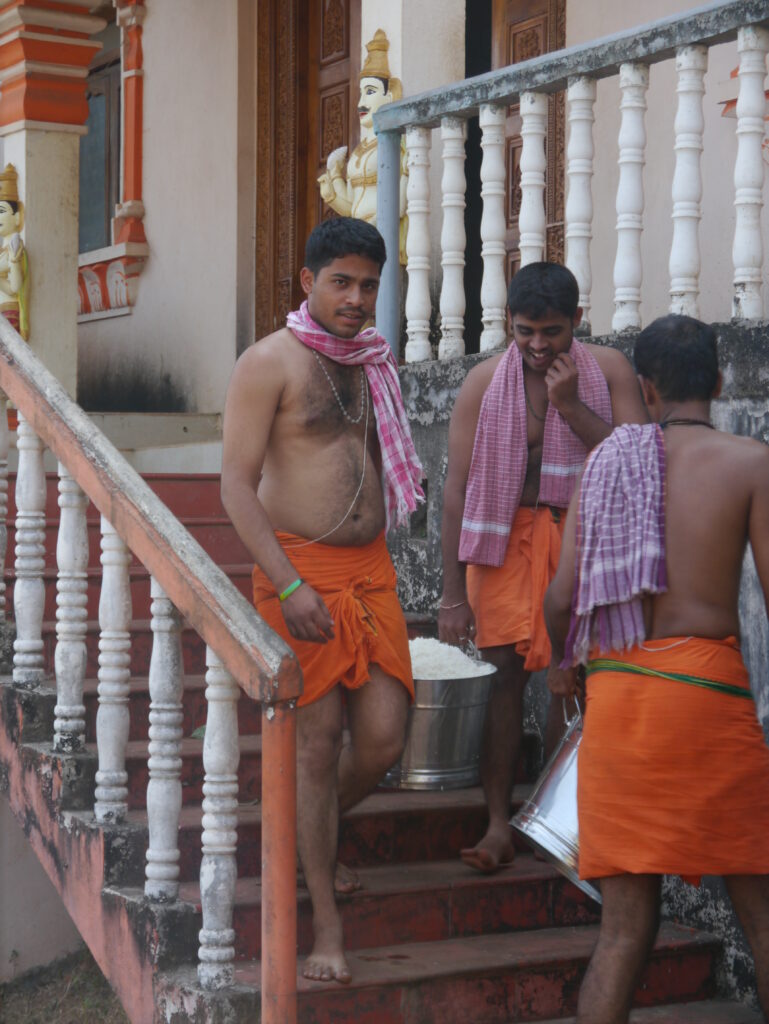 How to Tie The Lungi

Below is a step-by-step guide to wearing a lungi:

Step 1. You have to hold the rectangular part of the fabric and put your lower body into the tabular lungi in order to begin making the lungi skirt.

Step 2. Stretch and flatten the rectangular piece of cloth to stay just below the navel. This is to help you identify the right way of tying the lungi.

Step 3. To make the first fold of the lungi skirt, you have to swing the hand to one side. Grip the lungi firmly and follow the next step.

Step 4. Once you’ve griped one side firmly, swing your hand to the other side to make a lungi-like design. Now that your two hands have formed two folds below the naval, hold it firmly.

Step 5. The next step is to make the lungi fashion by folding the edges of the lungi downwards your stomach.

Step 6. Do another fold to make it look nice and firm. You can do multiple folds depending on the length of the lungi or your height.

Step 7. Finally, you can secure the lungi by rolling the edges downwards in a similar direction taken against the back. 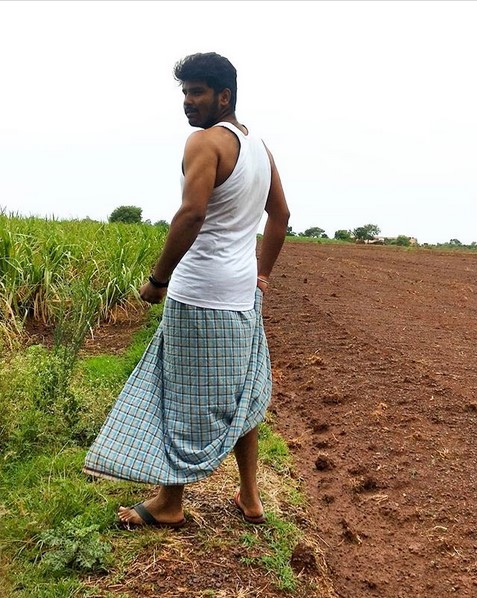 There are several ways available to knot the lungi as you desire. The simplest way available is to drape around your waist and fasten the two ends into a knot. Just as there are several other places, apart from the southern part of India that wear a lungi, there are numerous styles to tie a lungi. Most of the styles are either based on the occasion as well as the culture of the state involved. 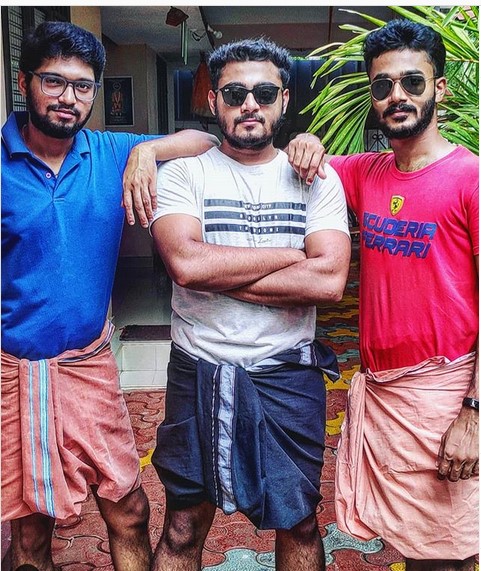 Tying the lungi might look simple but it’s an act that requires precision. If you don’t get it at the first attempt you can always try tying it again. You can also watch video tutorials on how to tie the lungi if a visual example will help you get it better. 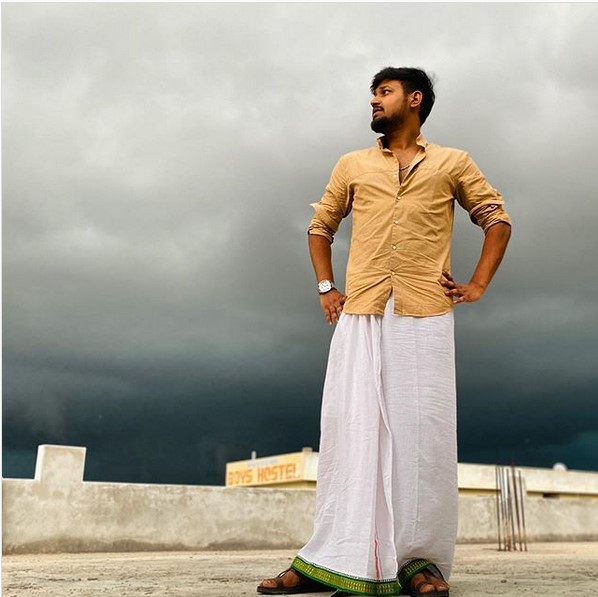 If you want to see how the lungi can be used to portray exquisite beauty, then you need to attend a wedding in southern India where Lungi is a traditional attire.

There are several styles of lungi you can wear for a traditional Indian wedding either as a guest or as a groom.

Most states in southern India go with white lungi adorned with gold. This makes it look really beautiful.

In this article, we’ll explore the trendiest lungi styles you can wear to stand out in any wedding ceremony.

Gold is believed to be metal of the gods, hence, it plays an important role in the wedding ceremony, as far as the groom’s attire is concerned.

In Kerala, the traditional dress for the groom is usually a mundu or lungi, often having a gold casava border. The groom can also carry a folded melmundu cloth on his shoulder. Recently, the tradition of grooms going bare-chested is phasing out as they now wear different shirts. The idea of wearing a Zari embroidered shirt on a lungi is to add a touch of exquisiteness to the simplicity of the lungi. 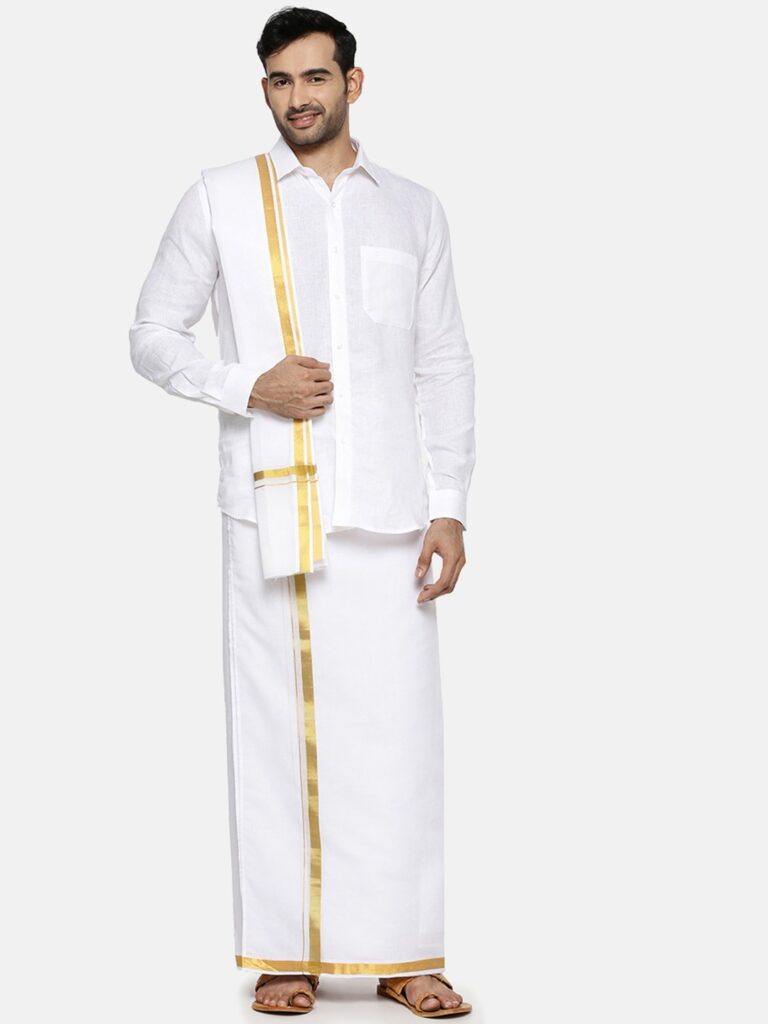 A lot of people opt for a prince coat because it is a modern style of dressing. The prince coat makes the person wearing it look and feel like royalty. It is a structured and well-tailored coat made to fit anyone. Most people wear it with a lungi to give them a neat and polished look. You can also add a rose pin or a pocket square to give it an even more sophisticated look. If you want to go a little overboard, you can add a matching colour melmundu to balance the traditional appearance. 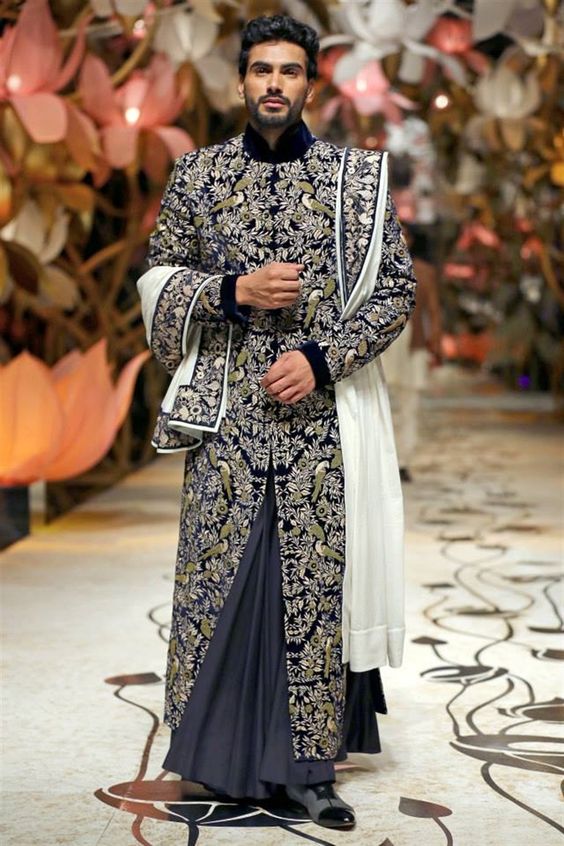 The kurta, a loose collarless shirt that is worn with the lungi. Some people like to swap the melmundu or bare-chested style for a kurta for a unique look. The kurta sits well on a lungi for any event but it’s a go-to for wedding ceremonies. You can wear a simple cotton kurta or silk kurta. As for colours, a white or cream colour on a lungi will do just fine. It can be designed in different ways, varying in length and structure. The best thing about this style is that both the lungi and kurta are simple attires that give you a fine blend of a classic and traditional look. If you are creative, you can add a few personal touches to this look. 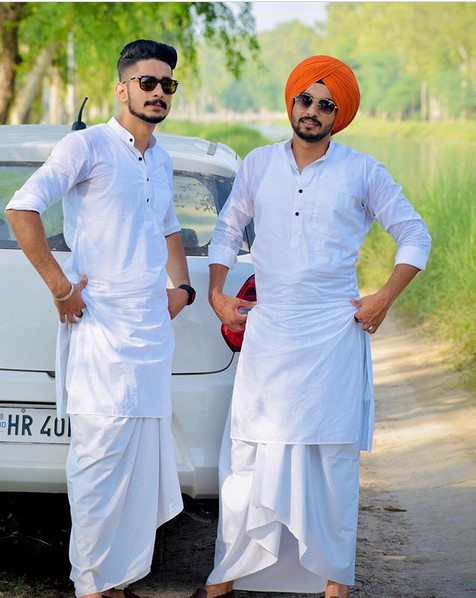 Formal Shirt on a Lungi 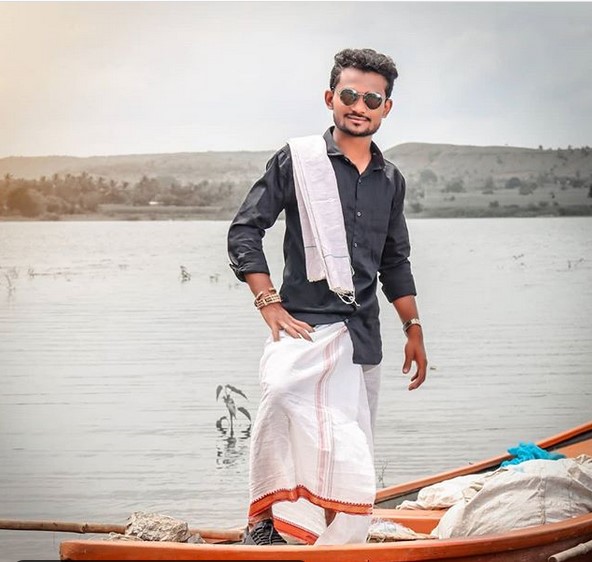 If you don’t fancy a kurta, prince coat, or a Zari embroidered shirt, you can opt for a formal shirt to go with the mundu. Formal shirts on mundu are becoming increasingly popular because the youths enjoy wearing them.

To synchronize your dressing with your bride, you can wear a shirt that matches the colour of her trousseau. You can wear a simple cotton long sleeve shirt on a white lungi with golden embroidery. If you want to spice it up, you can fold the shirt to your forearms to give your dressing a vibrant traditional look. 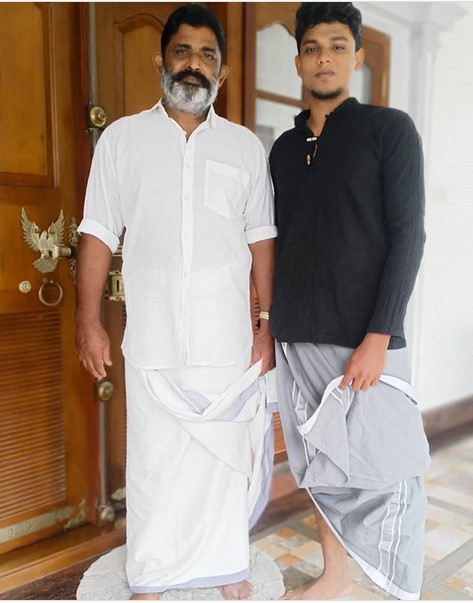 The mundu worn by the groom is just like the female Kasavu type of saree with golden embroidery which is known as Kara. The mundu must be neatly pleated and wrapped around the waist properly, to look neat. It is comfortable and stylish at the same time. Any of the above styles you decide on will surely make you stand out. Lungi might be a simple material but it does a lot when you wear it with the right combination. You can also style it up by adding a few accessories to make things look more fashionable.

The groomsmen are not obliged to wear a mundu but most of them enjoy wearing it. Most times what the groomsmen wear is decided among themselves and the groom. Groomsmen can also wear a lungi, even though there might be situations where they are not familiar with the tradition of wearing a lungi. They can wear plain mundu made of cotton and wear a red or white shirt.

The groomsmen’s dress should match the groom’s attire. just like the chief bridesmaids dress should match the bridesmaid’s attire. The groomsmen can also add sunglasses or any other fashion accessories to their dressing for a stylish look. You must pay special attention to the way you wrap the mundu to avoid tripping over while dancing and enjoying the wedding. You can follow similar steps on how to tie the mundu like that of the lungi mentioned above. 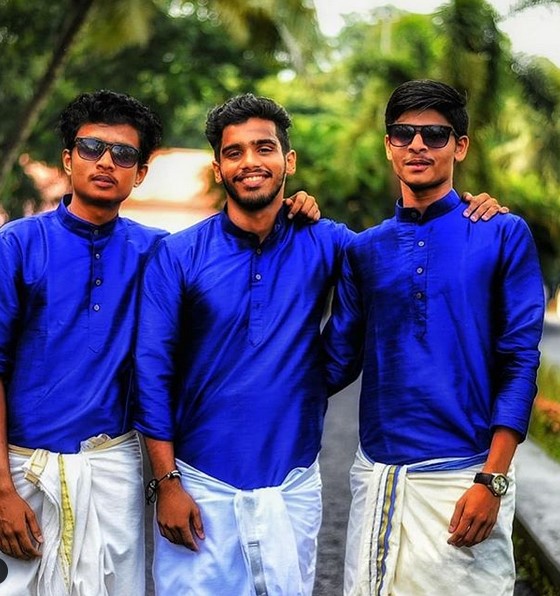 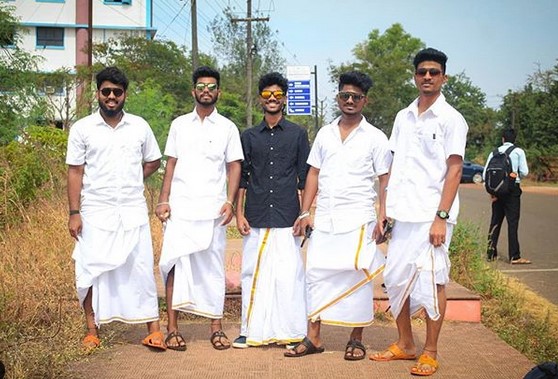 As a wedding guest

Wedding guests are also not left alone in the lungi craze. Designers have started to come up with different styles for people to select from. As a matter of fact, it is becoming difficult to keep up with the latest trends, but men are more than willing to experiment around the different ways of wearing a lungi in fashion. Now there is the already-draped lungi, if you are not willing to go through the stress of draping one or if you don’t know how to. A more modern way of wearing the lungi and stand out amongst the other guests is to wear a half jacket, a short kurta or a denim jacket. This says a lot about your versatile sense of fashion and how you are more in tune with modern trends. 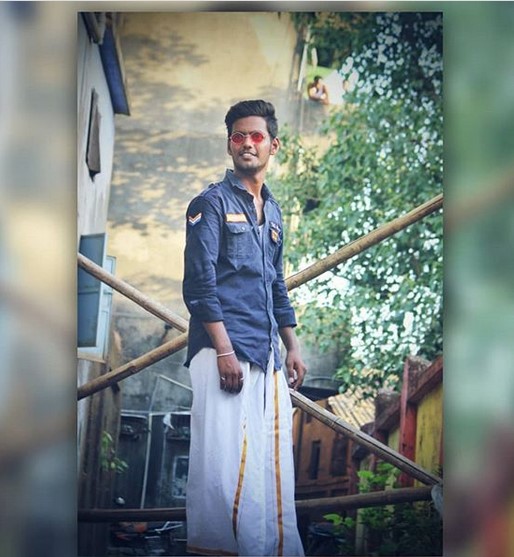 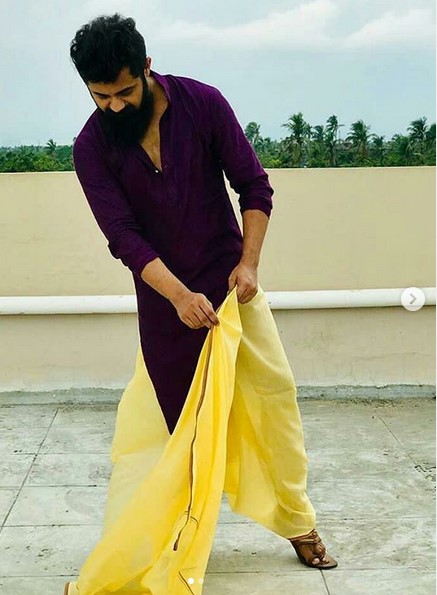 Wearing The Mundu in Kerala style

In Kerala, the style of wearing the mundu is different from that of other places. Here, the lungi is tucked around the waist in the right direction. The bottom portion of the lungi is then pulled and taken to the back to tie on the waist. This style is comfortable, and it gives you free movement without the fear of tripping yourself over. It is also worn by women in Kerala, and are very colourful with different designs. 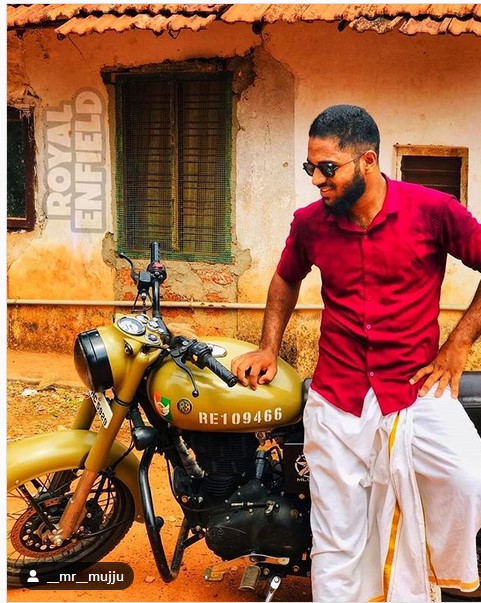 Wearing The Lungi in Tamil style

In Tamil Nadu, only men wear the lungi, as opposed to some other places where women also wear it, like Kerala. The technique to tie the lungi in Tamil Nadu is different from that of Kerala. Lungi is also known as Kailis in Tamil Nadu. The lungi is worn towards the right side of the waist, while the Kailis is worn towards the left side of the waist. During formal occasions including weddings, most Muslims in Tamil Nadu opt for a mundu. It is mainly worn on informal or casual occasions, especially as nightwear because it is soft and comfortable to sleep in. Checkered patterned lungis are a more common choice amongst the people of Tamil Nadu. 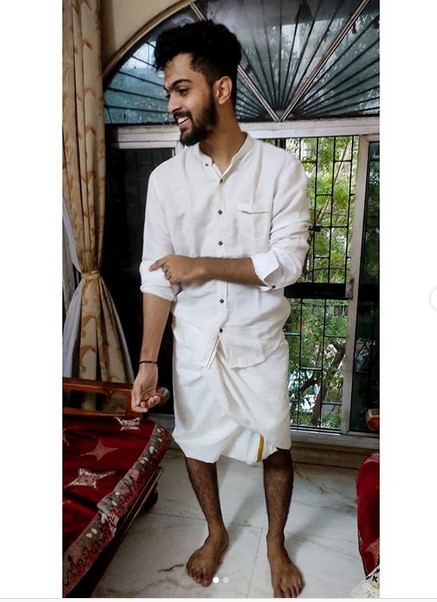 Clothing is a big part of cultural heritage, and we express ourselves through them. Undoubtedly, the lungi is a beautiful traditional attire for men to wear on special occasions and is sometimes worn by women and children as well. Now that you know how to style yourself with the perfect attire to grace that occasion, you should opt for a mundu if you want to look simple, yet stunning.