The piece of clothing called the dhoti is a type of sarong that outwardly looks like a trouser. It is also known as vesti, chaadra, panche, dhotar, mardani, panchey or dhuti. It is usually worn during festivities, religious ceremonies, or marriage ceremonies. The dhoti is a garment that is common to the indigenous subcontinental men of India and it is worn around the lower part of the body.

It is styled and made from a piece of cloth that is rectangular and is usually unstitched. The cloth is usually around 15 feet long. The whole length is wrapped around the legs and the waist of the men and is either knotted in the front or at the back. They usually come in plain or vibrant colours in different textures. Silk dhotis have embroidery around the edges and are worn during formal occasions. 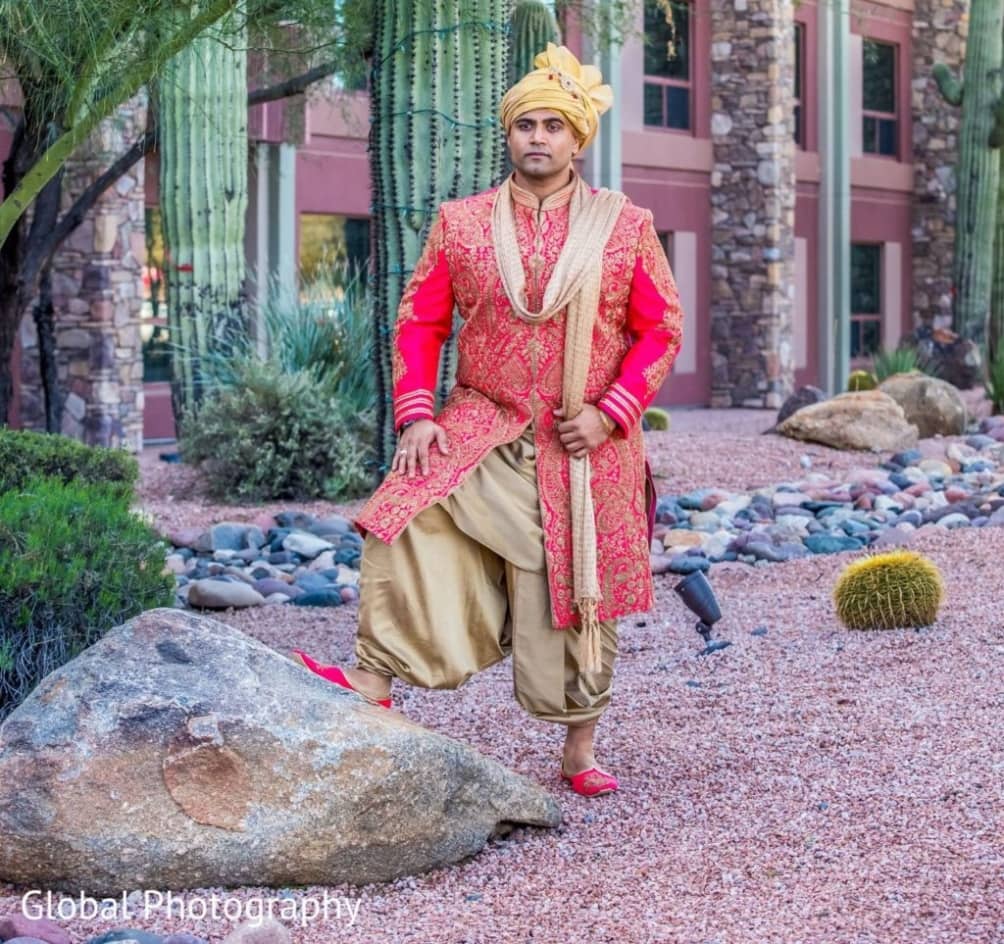 Get Custom Made Groom Wear

The dhoti is worn both formally and loosely by men, and both styles are wrapped differently, depending on the occasion. As a more casual everyday wear, the dhoti is wrapped around the legs firmly, with the back portion of the dhoti being pulled to the front and tucked firmly at the waist, then tucking the two loose ends at the back creating a form of firm fitted trousers. In the case of a formal dhoti style, it is passed through the legs and is tucked at the back, covering the legs loosely, with it flowing into long pleats at the front.

A Brief History of the Dhoti

To understand the origins of the dhoti, we have to go back in time. The word dhoti is derived from ‘dhauti,’ which is a Sanskrit word, and in literal terms means to cleanse or wash. It was seen as a clean garment that was worn on an everyday basis. The style of the dhoti was passed down from the ancient Antriya. 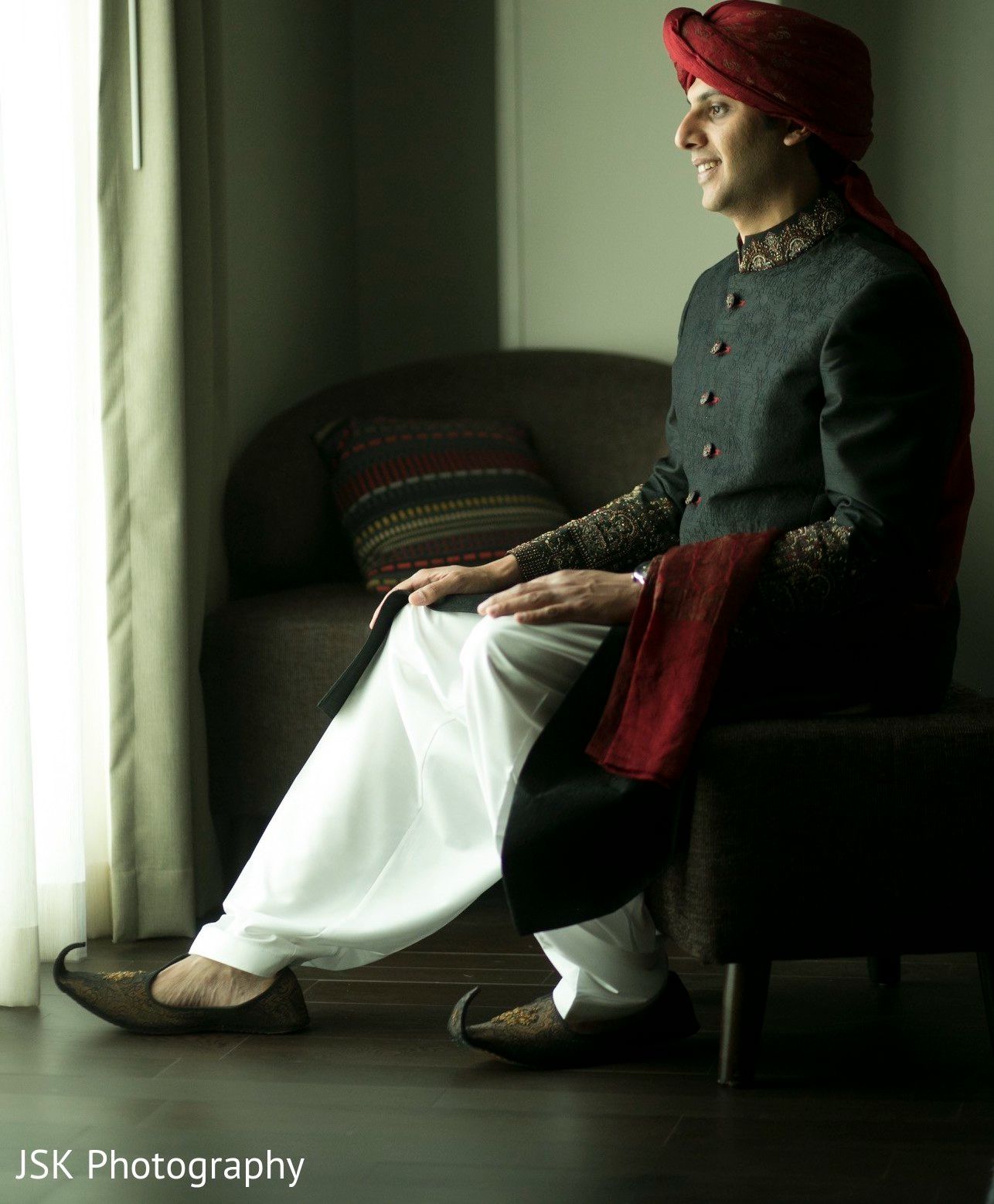 The specific origins of this ancient traditional outfit aren’t known but have been dated as far back as the 5th century BC. Evidence has been found to prove that men of the Indus Valley Civilization (IVC), a Bronze Age civilization, wore the dhoti around their waist most times. This garment was most common in the northern and southern parts of the Harappan civilization.

The dhoti is made from the finest cotton, as the cotton industry thrived in ancient India. These fabrics, once spun and woven, were usually dyed to give some vibrance to the material. Cotton was used because it was the most convenient material available. It has been described by an ancient historian Herodotus as exceedingly beautiful.

The dhoti later gained popularity across India, mostly because of the comfort provided, and is easy to wear for daily activities. Another more logical reason for this style of clothing was the hot and dry climate of the Indian subcontinent. This piece of clothing is ideal to wear during the hot summer months as it provides ventilation. 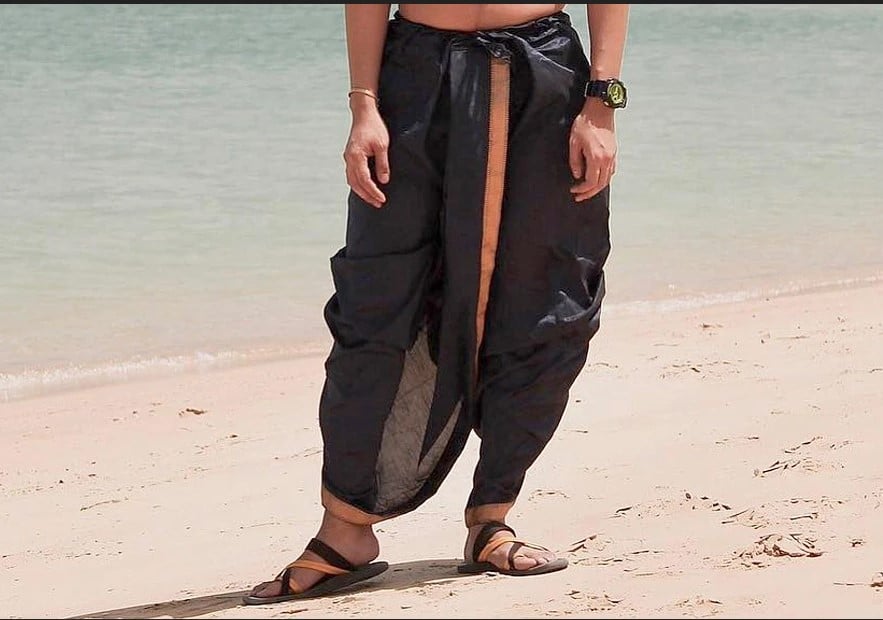 The sheer exquisite nature of this attire is rooted deep in the culture, as it formed part of the costume of ancient rulers and kings of India. Based on ancient architectural designs, the outfit is seen wrapped around the structure portraying Ashoka, the Chakravartin King, in Amravati. Beautiful colours and hues, coupled with extravagant gold-threaded embroidery were used when designing dhoti for kings, poets, and individuals of opulence.

The dhoti has always been a symbol of class among the high and mighty of ancient India, and a more elaborate design was used to show social status in the society. The dhoti also goes by many other names, depending on which part of India one may find themselves.

Different Ways To Style The Dhoti

As simple as this clothing seems, the people of India have found very elaborate ways to style it, with a little colour and sophistication. The various styles of the dhoti largely depend on the occasion for which it is being worn. 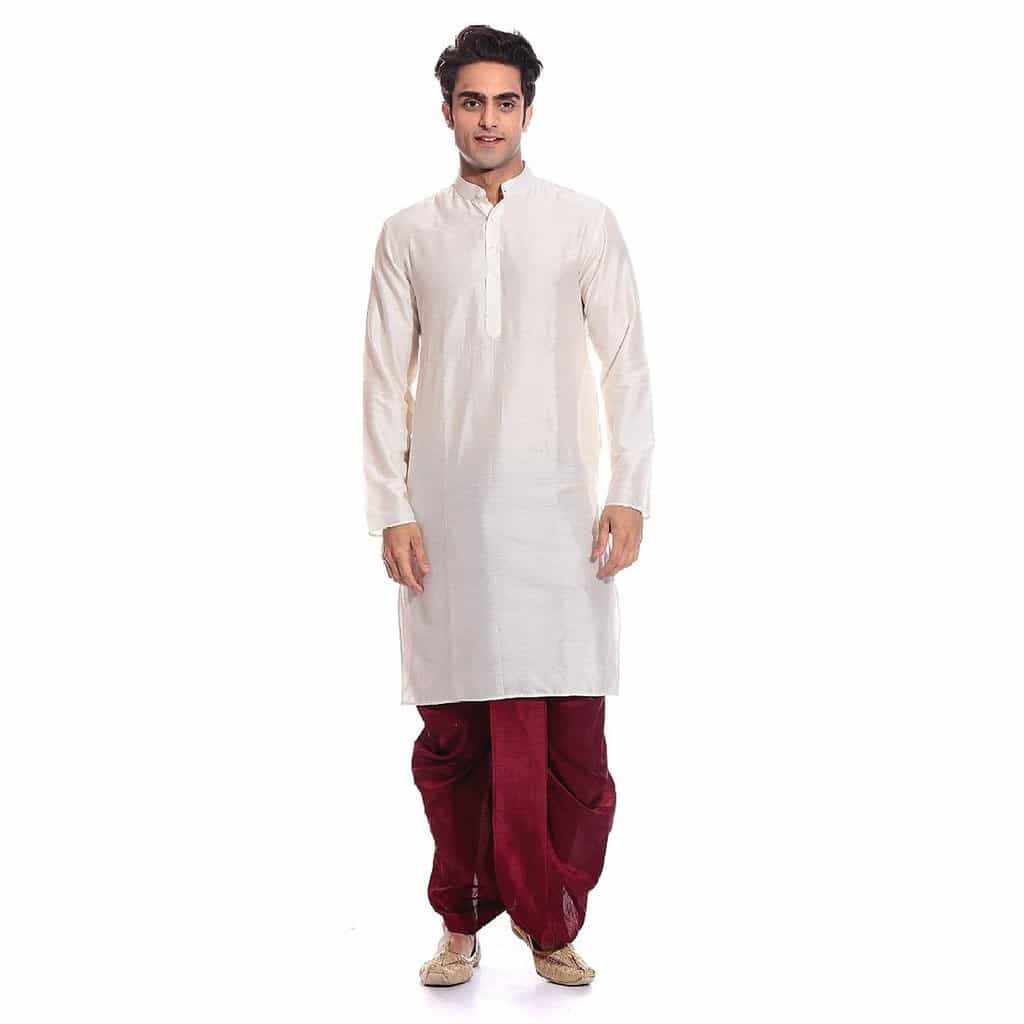 The red dhoti, also known as sowlay, is mostly used by priests at temples. This unstitched clothing is believed by some priests to be less susceptible to pollution, making it more ideal for spiritual rights. This adds a sober, yet colourful highlight to the religious ceremony. 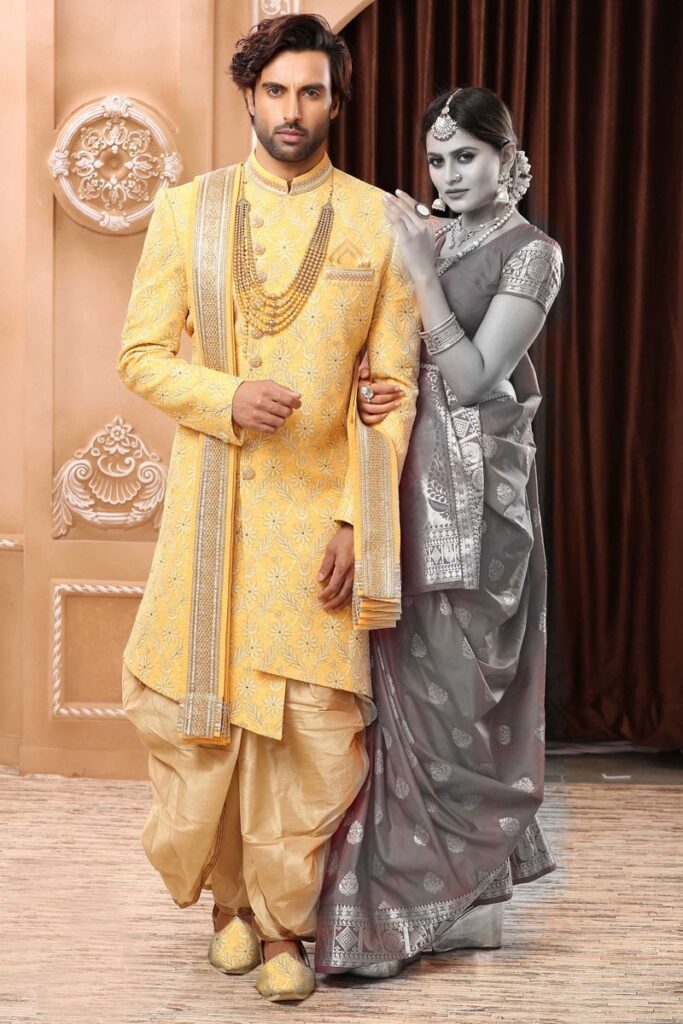 This garment worn by the men is a very crucial part of traditional Indian wedding ceremonies. In Bengali weddings, the groom usually wears a white dhoti, while in other places a turmeric-yellow or white fabric is used for both weddings and upanayanam. The dhoti has gold embroidery taped round the edges of the fabric to give it some more colour. It is not a must that both groom and bride wear the same pattern of fabric or the same colour for their wedding. Although, the same colour or a similar pattern makes it more beautiful and unifying, uplifting the entire atmosphere of the wedding. 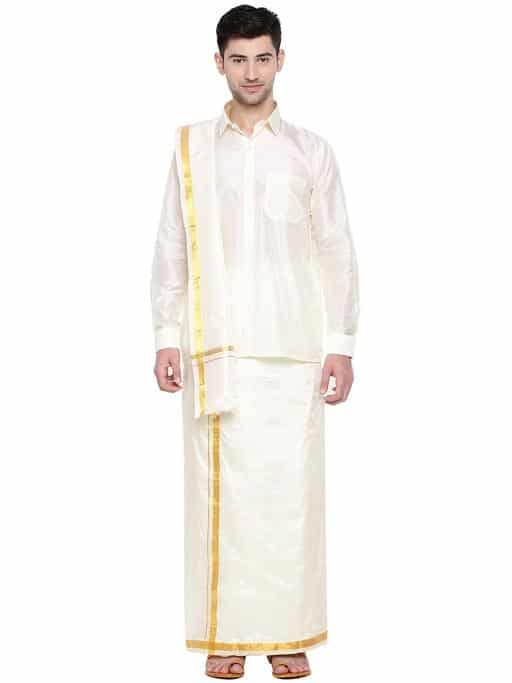 The dhoti can be wrapped in various ways, but one of the most common is the plain wrap. This style of draping is most common in south India and is seen mostly in parts of Tamil Nadu,  Kerala, Andhra Pradesh and Karnataka. When the men are involved in tedious work, the garment is folded in half up to the knees. The dhoti made from cotton is mostly used to work in the fields. This style of dhoti is usually worn by politicians, because it is an attire that is believed to commande respect and dignity. 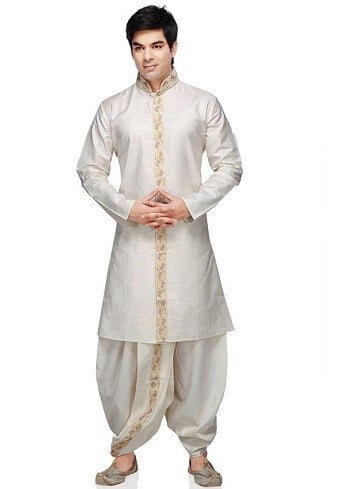 This style is the second most popular way for Indian men to wear dhoti. It means Pancha, with five knots or five-folds, because the garment is knotted five times to firmly secure it around the waist or has five folds layered on each other. For this style, an eight-yard long garment is used and is wrapped around the waist tying the top of it in front to form a belt, and then tucking in the loose ends on the left and right at the back. This is a very popular style for south Indian men who work in the fields.

Some of the most common places the dhoti is worn are Maharashtra, Tamil Nadu, Assam, Kerala, West Bengal, Andhra Pradesh, Goa, Bihar and Madhya Pradesh. Although the dhoti is very common in some parts, it should not be mistaken for the lungi, a similar style of cloth but much smaller, mostly worn at home because it is more comfortable and casual than the dhoti.

The Dhoti For Indian Weddings

This age-old outfit is part of a complete whole and is usually worn for festivals or a marriage ceremony. This piece of clothing holds a very important place during marriage rites. However, this is most peculiar to south Indian weddings. The bride and the groom are both adorned with breathtaking outfits, complete with accessories.

Weddings in India can span over several days, and for each day of the ceremony, both the bride and groom are dressed in different outfits. Each attire is distinctly different from the last, with each outfit symbolizing the meaning and importance of the marriage and the time that comes after.

The velvet Dhoti for groom 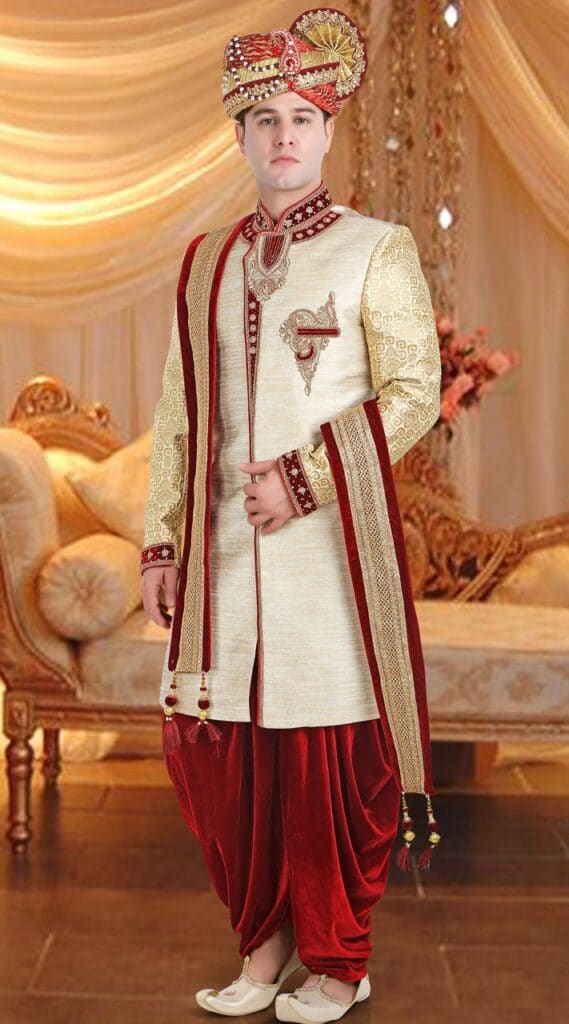 ‘Extra attention and care are given to the finishing of the attire, with the edges and collars being embroidered with gold-thread, and finally studded with embellishments.

Dhoti for Elders in a wedding 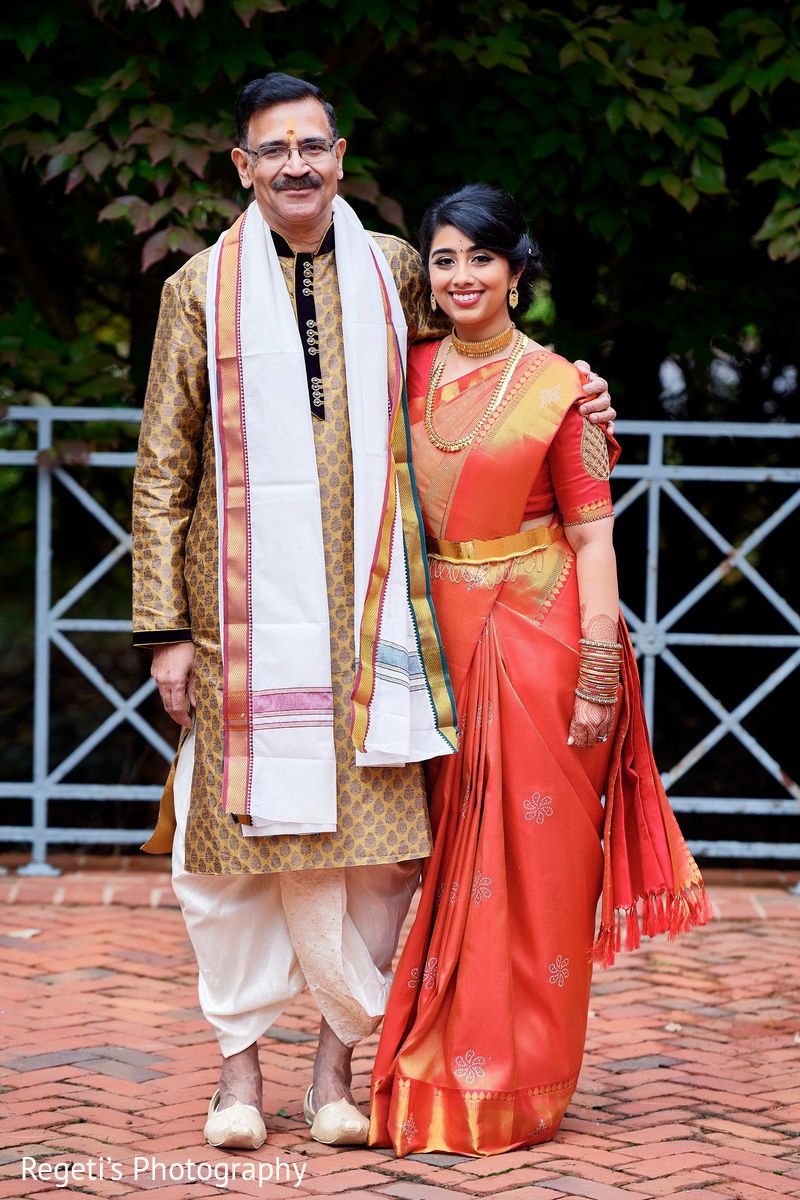 During marriage ceremonies, the dhoti is worn with a kurta, and Angavastram is used to cover the upper part of the man. The groom also makes use of accessories such as pearl necklaces and various gold ornaments worn with the dhoti to complement the look. The groom exudes elegance and has a graceful air around him. The dhoti can be made from both cotton or raw royal silk for that extra touch of class and elegance.

This attire is so significant in the life of men that a dhoti ceremony is held when a boy wears dhoti for the first time in his life. This is to show his transition from childhood to adulthood and to confirm his status as a man. The dhoti has changed over the years, thanks to innovation and technology. However, it remains at the centre of the Indian culture, and Indian men wear it with so much pride. 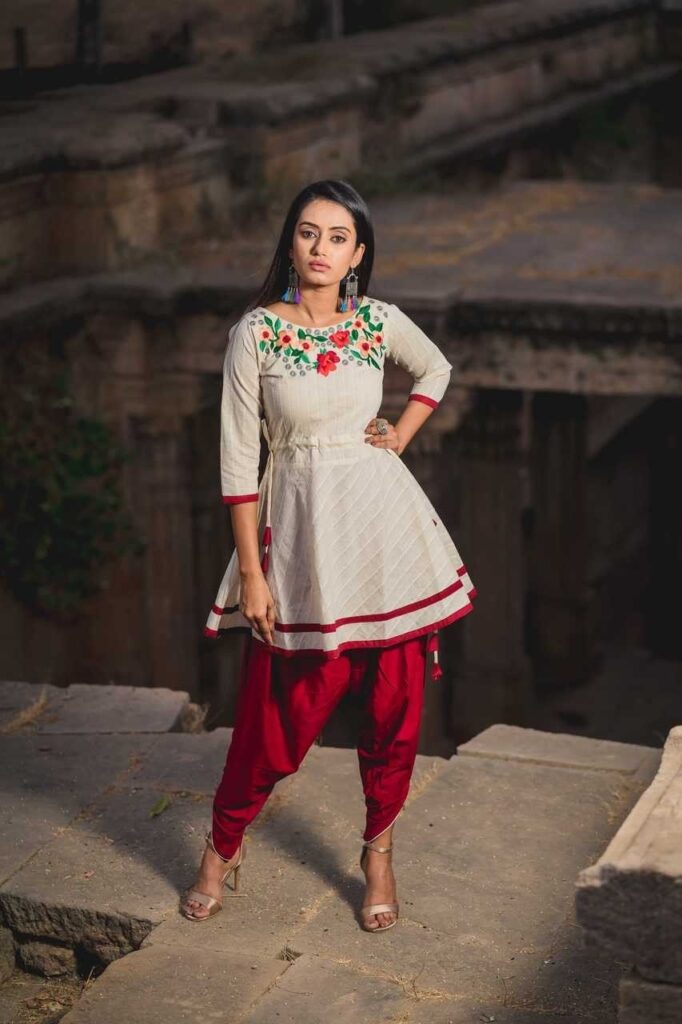 It has now been modernized from its usual unstitched nature to look more like trousers. The charm is not lost on most men, and Rajputs are so proud of wearing them. The dhoti is worn in a very fashionable manner by the Bengali men, and for a more sober look, the pleats are arranged in the front.

The most common material used for dhoti design is cotton, or Tussar, or silk. Depending on the region, the dhoti is worn differently and for different occasions. Maharashtra priests in the temple wear a crimson-coloured dhoti. The dhoti in recent times isn’t limited to men alone, women are also seen sporting the dhoti. 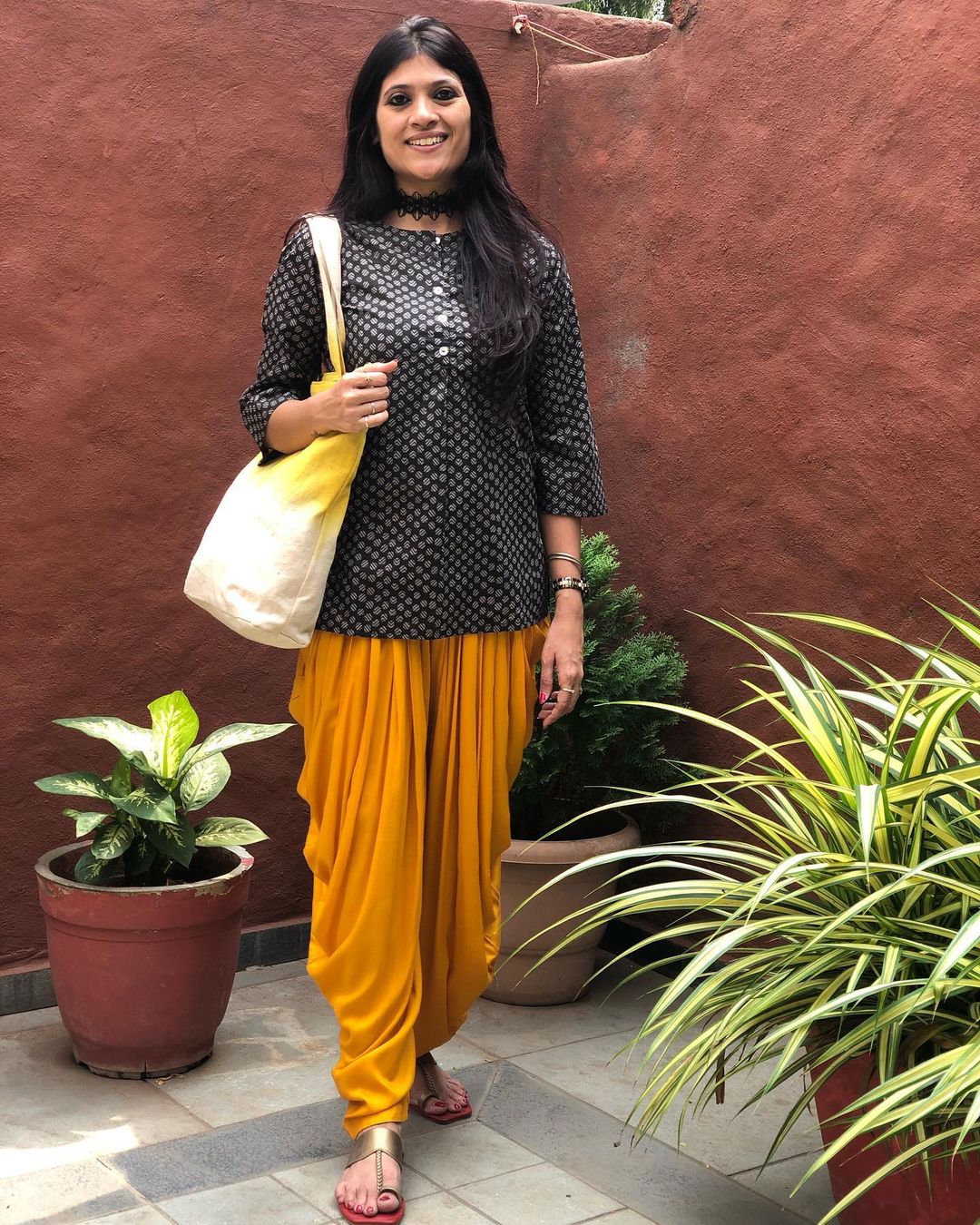 They also come in the ready-made form with designs and artworks on them and also come in sizes for children. Vibrant colours and patterns add to the prestige of the dhoti, especially among the younger generation. The evolution of this elegant piece of clothing has made it difficult to lose sight and touch of the rich tradition and heritage of India.

Over the past few years, there has been cultural diffusion. The western culture and style of dressing has influenced the Indian culture much like the rest of the world. Now, the youths tend to dress more like the westerners, and are largerly dependent on the on their way of dressing. The dhoti is no longer worn to officies or parties, but has now been reduced to a simple home atire. On other occasions, it is worn as a traditional wear for certain kinds of gatherings. The dhoti makes an appearance either during wedding ceremonies, religious gatherings, or native festivities. 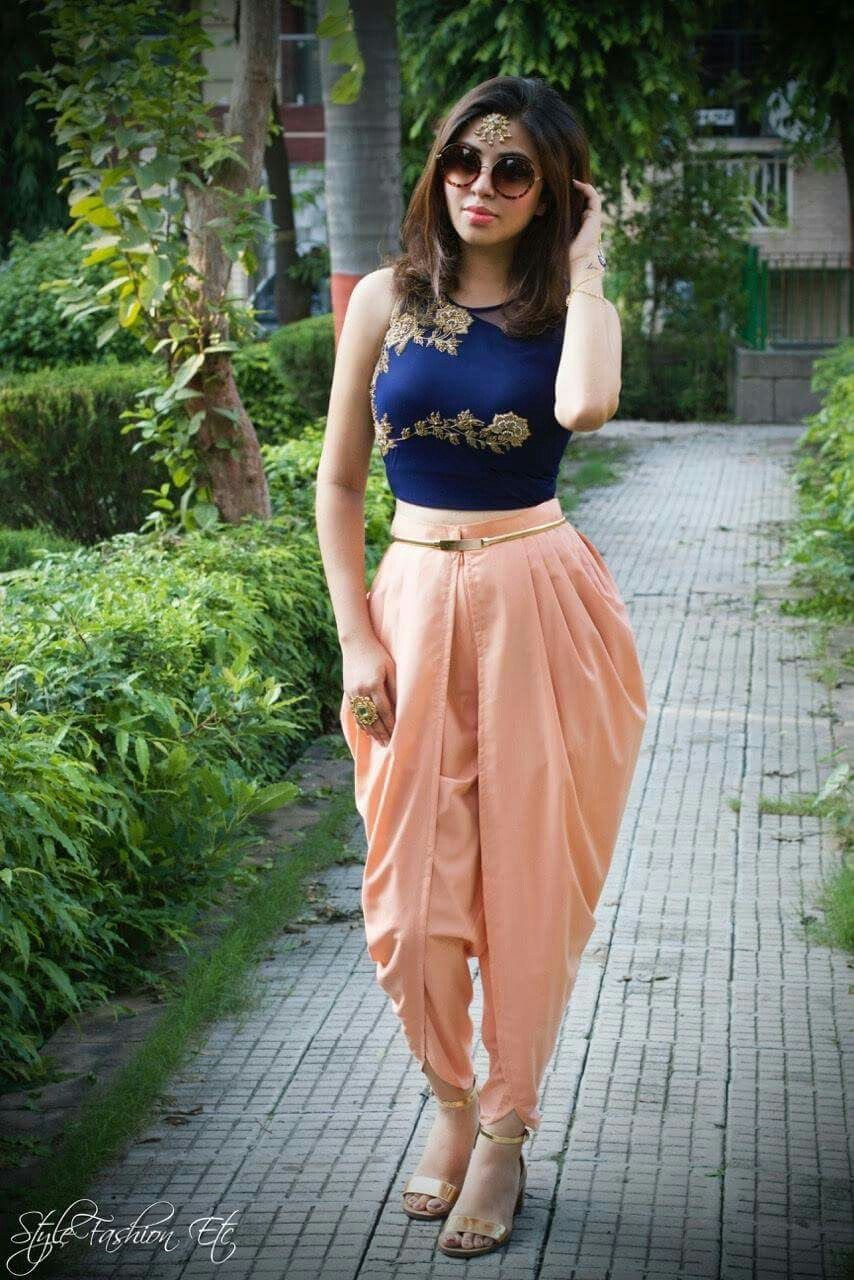 On the brighter side, the dhoti has been transformed into a more modern style. Despit the modernisation, it is still not sown to the knees because it is seen as disrespectful and informal. The dhoti is availabel due to the influence of wester cultures, and has made its way across borders. It is now also widly worn by women, and children as well. The dhoti is still recognied and held in high regards in certain parts of India, and are worn by the men in these parts for special occasions and regularly.

Even if you are not Indian, you can own a piece of this exquisite clothing. You can ither wear it to ceremonies or festivities, or just on a normal day out. You are sure to stand out of the crowd with this is beautiful traditioan wear.

The conventional dhoti is simple, while still elegant and stylish at the same time. It is seen as the emblem of the prestigious Indian culture. When worn, it brings an air of nobility while adding a traditional tinge to the look. This piece of clothing has stood the test of time and is still a favourite among Indian men — especially in the southern part of the country — for social gatherings, religious ceremonies, and festivities. It goes very well with a kurta, a plain achkan or a galabandh suit.

The importance of the dhoti is seen because it is the foremost choice of attire for men during marriage ceremonies, especially for the groom. Tourists are encouraged to shop these beautiful clothing, either online or in local shops when they are in India. There is so much that can be learned about the Indian culture just from their clothing, and it is easy to be swept away by the amazing history of what was and now is modern India. Viewing their culture through the lens of time, clothing, and style is a beautiful journey.